Since Facebook changed its name to Meta, the concept of "MetaVerse" has entered the public's field of vision. In the first year of Metaverse in 2021, major technology companies at home and abroad are scrambling to deploy: Microsoft released the corporate Metaverse, Tencent proposed a true Internet, byte Beating, Baidu and other companies have joined the metaverse track... For a while, "metaverse", a term full of virtual and futuristic sense, is accompanied by VR/AR technology, network algorithms, artificial intelligence, video games, The development of human-computer interaction and other technologies has progressed from the sci-fi world to reality, and successfully broke the circle with the top trend.

Under the new trend of the industry, the display industry under the blessing of laser intelligence will serve as a window to touch the virtual world, bringing infinite possibilities to the metaverse...

Window to the Metaverse - Display Screen

The display industry can enter the metaverse from two levels: wearable devices such as VR and AR, and large immersive display screens. In particular, VR and AR headsets are the standard hardware of the Metaverse. In recent years, shipments have continued to soar. The Oculus Quest2 released by Meta (Facebook) has become a phenomenal product in the VR field. Shipments in the first quarter exceeded 660,000 units, and ICD predicts that by 2025, global VR and AR device shipments will reach 49.65 million units.

The metaverse world has put forward higher requirements for display technology. First of all, the screen of the wearable device is very close to the eyes, and the Mini LED technology can make the picture realism, contrast, brightness, color display and other aspects more refined. Compared with LCD, Mini-LED has multiple backlight partitions, which can independently control the brightness of a small area of the screen, and the color is more saturated, not only "black and pure" but also "bright and transparent"

Secondly, in the world of the Metaverse, the naked-eye 3D and immersive large screen create an intuitive virtual and real world. At the current technical level, it also has a wide range of application scenarios, bringing an intuitive three-dimensional sense. Compared with high-cost and short-life OLEDs, the larger the size of the Mini LED, the lower the cost, and at the same time, it can adjust the brightness independently and maintain uniform heating under high brightness.

At present, Mini LED screen is applied between micro screen and large screen with its own superior performance, and it has become an indispensable hardware in the future development of "Metaverse".

The increasing demand for Mini-LED technology in mobile phones, computers, tablets, TVs, VR/AR and other displays has made Mini-LED enter a new round of capacity construction cycle, and the scarcity of high-quality high-end inspection and repair equipment has become increasingly prominent. . However, although the mass production of Mini LED displays is striving towards 100% yield, due to factors such as technology and craftsmanship, the occurrence of defective chips is unavoidable, resulting in high costs, detection and repair of huge and small Mini LED chips are still a daunting challenge.

In response to this technical problem, HGLASER, which is an industry-leading alternative to domestic products, has submitted its own answer sheet to the display industry with its own advanced laser application technology - Mini LED display module automatic laser rework equipment. This equipment is used for the repair of defective chips in the display panel packaging industry, and can be applied to both direct display and backlight modules 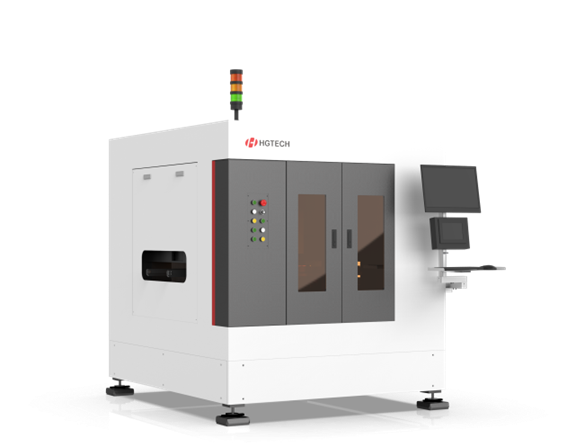 • In the process of repairing the dead spots of Mini-LED boards, we provide laser removal equipment for the surface adhesive layer to visually identify and locate the dead spots, automatically measure the distance and focus, and complete the removal of the protective adhesive layer of the LED lamp.

• The laser ink removal equipment is specially developed for the opening of the solder mask ink of Mini-LED PCB board, which replaces the traditional exposure and development process, and solves the problems of ink residue, excessive ink thickness, and excessive Under Cut on small-sized and small-pitch pads, effectively improving the Yield, reduce production process. In the process, laser equipment and intelligent manufacturing solutions such as solder mask ink laser removal.