In recent years, the domestic laser industry has developed rapidly, setting off a wave of domestic substitution. On the one hand, domestic manufacturers concentrated on launching an assault on higher power fields, and the 10,000-watt laser opened the door to applications. On the other hand, laser technology in high value-added fields such as cladding, cleaning and welding is accelerating the replacement of traditional processes, and new vents are about to appear!

The first national standard has begun to be formulated, and the next 100 billion market is opening up

On April 20th, the "Green Manufacturing Laser Surface Cleaning Technical Specifications" project kick-off meeting was held in Wuhan. Expert representatives from 23 units in various fields such as aviation, aerospace, rail transit, machinery, electric power, and national defense attended the meeting, focusing on lasers. Outline and first draft of national standards for surface cleaning technology. The standard is expected to be released in the second half of next year, which will fill the domestic gap and further regulate the healthy development of the industry. Relevant data shows that the domestic laser cleaning market in China alone has a potential demand of more than 60 billion yuan, and the global demand is more than 100 billion yuan. Once the market matures, China's domestic laser industry will gain a huge incremental market. To this end, industry chain companies are stepping up their deployment! 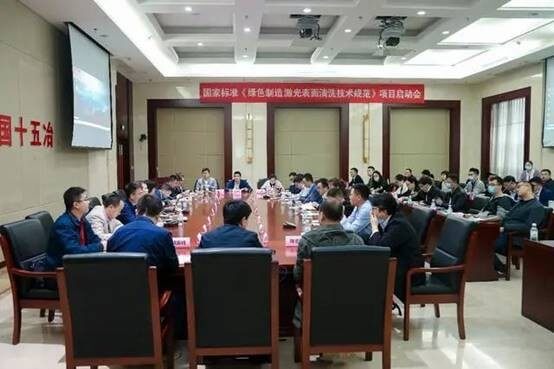 For a long time, the surface treatment capacity of China's manufacturing industry has lagged far behind production, which has also greatly restricted the process of manufacturing from large to strong. With the implementation of the 14th Five Year  Plan, the demand for advanced technology, especially for high-end manufacturing and energy conservation and emission reduction, has become more and more urgent. In terms of surface treatment, the country urgently needs a comprehensive upgrade of technology and craftsmanship.

Traditional cleaning processes such as mechanical friction cleaning, chemical corrosion cleaning, strong impact cleaning, high-frequency ultrasonic cleaning, etc., not only have a long cleaning cycle, but also are difficult to achieve automation, and have harmful effects on the environment, as well as cannot achieve the desired cleaning effect. Relatively speaking, laser cleaning is a more efficient and environmentally friendly process, with no pollution, no consumables, low cost, high efficiency, no contact, no stress, no damage, good controllability, precise cleaning of optional areas, and being able to clean difficult-to-reach hazardous areas, etc. With these advantages, it is challenging the traditional processes.

Laser cleaning technology was born in the 1980s, and it wasn't really applied in industrial production until the early 1990s, and gradually replaced traditional cleaning methods. Due to the relatively limited investment in early technology and manpower, the overall development of the laser cleaning market has been slow. Since 1998, laser cleaning technology has ushered in the first wave of development, mainly led by European and American countries. During this period, laser cleaning applications focused on the surface of metal materials, such as aircraft fuselage paint removal, mold surface degreasing, engine internal carbon deposition, and pre-weld joint surface cleaning. American Adapt laser and Laser clean all companies, Italy's ElEn group company, Germany's Rofin company, France's Quantel company, etc. have invested heavily and gradually monopolized the market.

In contrast, in China, laser cleaning technology started relatively late. In the early days, only a few universities such as Xi'an Jiaotong University, Dalian University of Technology, Nankai University, Huazhong University of Science and Technology, and Chinese Academy of Sciences carried out some research work. It was not until 2011 that attempts were made in a small number of application areas such as cultural relics restoration. Under the influence of the policy of environmental protection and emission reduction, the domestic industrial laser cleaning market gradually opened up in 2016, and a wave of attention was ushered in 2018. Upstream laser manufacturers began to invest in process research and development and introduced laser cleaning light sources and portable cleaning solutions to the market, and began to test the laser cleaning market.

In terms of specific applications, Wang Chunming, a professor and PhD supervisor in the School of Materials Science and Engineering of Huazhong University of Science and Technology, believes that there are currently three major markets for laser cleaning: First, it replaces existing industrial cleaning (chemical cleaning and ultrasonic), the market size is more than 100 billion, at least 30% can be replaced by laser cleaning, about 30 billion; second, it can replace manual polishing, which can become a standard configuration in every manufacturing workshop, about 10 billion; third, newly developed application areas: such as cultural relics cleaning, building cleaning, street cleaning, etc. , The market size is about 20 billion.

From the perspective of market alone, the laser cleaning field is undoubtedly a very attractive gold mine for the domestic laser industry, which is increasingly competitive. To this end, manufacturers such as Huagong Laser, JPT, Raycus Laser, Chuangxin Laser, Han's Laser, Shanghai Linshi Laser and Wuhan Xiangming Laser are continuing to increase their investment in market promotion and accelerate the maturation of the application ecosystem.

From the perspective of industrial development, the domestic laser cleaning industry has long lagged behind European and American countries, the main reason being the limitation of core light sources. The laser industry in Europe and the United States started early and has long dominated the industrial laser application market, occupying the world's most important market share. Of course, more resources are invested in emerging markets such as laser cleaning to form a first-mover advantage.

In recent years, as domestic laser manufacturers continue to break foreign monopolies in the field of core light sources, this has brought about a substantial drop in laser prices, which has also created conditions for the development and application of domestic laser cleaning equipment. On the other hand, competition in the sheet metal cutting market has become fierce, and domestic manufacturers urgently need to find new growth points in order to seek differentiated competition. Driven by multiple factors, the domestic laser cleaning industry has begun to enter the fast lane.

Because the scenes involved in surface treatment are very complicated, and the composition and structure of the attachments on the surface of the object are different, the mechanism of the laser action is also different, which leads to the fact that laser cleaning is not like cutting, marking and other applications that are easy to promote in an all-round way. Possess strong process research and development capabilities. In addition, laser cleaning also has a single nature. How to use a laser to clean different matrix materials is also a very big challenge for laser manufacturers.

Judging from the current progress, although domestic laser cleaning equipment has continuously made breakthroughs in power and has begun to gradually realize localized substitution in the high-power field, there are not many truly mature equipment, and most of them are still in the experimental adjustment stage. Large-scale industrial applications put forward higher requirements on the stability and automation level of laser cleaning equipment, which need to be comprehensively considered and optimized from the links of laser, motion control, and laser head.

In addition, it takes a certain period of time for any advanced technology and process to be accepted by the market. Judging from the market performance in 2020, as manufacturers continue to increase investment and upgrade iterative products, the domestic enthusiasm for the laser cleaning market is slowly rising, and the attention of the upstream and downstream industry chains is also increasing. Coupled with the formulation of the first national technical standard, it will further regulate the domestic laser cleaning market and lay the foundation for the further opening of the downstream application ecology.

From the perspective of application areas, with the further implementation of manufacturing upgrades, molds, high-speed rail, aviation manufacturing, semiconductor wafers and other fields have strong alternatives to traditional processes that have reached environmental protection needs. Domestic manufacturers need to seize the opportunity to strengthen the industrial chain, work together to promote the large-scale application of laser cleaning and empower high-end manufacturing!

Summary: China's laser cleaning market is still in the early stage of the industry, and it is bound to face many challenges in the process of market development and process substitution. Chinese laser manufacturers have realized the localization of key components and verified the feasibility of laser cleaning technology. The next step will continue to iterate in process innovation and contribute to the full opening of the laser cleaning market!